We had pulled our review response to Distrowatch for Linspire 7 and Freespire 3.0 because we wanted to put this thing to bed and when one of our people talked to Jesse Smith he assured that would happen should the response be removed, but alas it has not.  But because Distrowatch has refused to report on new releases and showing bias to Linspire we have decided to republish the response in its entirety.  We are doing this because we want the truth of what happened to be out there and not just the one side.  We have attempted to work with them to mitigate the situation but since they obviously have no desire to treat Linspire and Freespire fairly and equally here is the response:


So I was reading Distrowatch and I came across the review of Linspire and Freespire.  Really it wasn't a review and should have been called "In defense of Linux Mint"  So while I could sit here and insult the guy and tear apart his review piece by piece but he is entitled to his opinion I'm not gonna bother.  That's what a review is, someone's opinion.  Now that you have read his opinion let me fill in the blanks that he left and give you some facts.

When did this "review" start

It started a couple of weeks ago and the guy sent me an e-mail saying he wanted to do a review for Distrowatch.  I forwarded the e-mail to press.  She said, "Roberto this is just a hit piece do what you want he is going to write what he wants to write and be done with it."  I also forwarded it to our lead engineer and he said the same thing.  So I wrote him back and the impression I got was this guy was simply pissed because he felt I disrespected or insulted the other Ubuntu derivative Linux Mint.  That's fine.  I turned it over to the head developer because I had some family issues pop up and Simon took over.   Let me clarify that, he had access to the head of development the guy who works on it more than myself and he didn't ask any questions regarding development, didn't ask us for access to the changed source code which is completely available via our download server, only icons.

So let's go over the facts.

Untruth One - The installer - We do not monetize the installer at all in Freespire or Linspire.  Any claim that we do is devoid of fact and whoever says we do is lying and what's most important they know they are lying.  His screenshot does not represent us as a US company, in fact, its a UK survey site.  So what happens if you click release notes while connected to the internet in Linspire or Freespire?  Very simple. 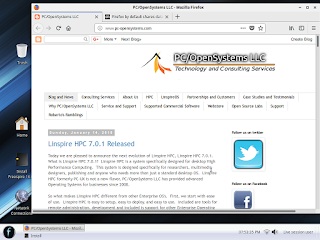 In this case, it takes you to the PC/OpenSystems LLC website.  So wherever he got that URL from was not from Linspire or Freespire.

QA (Quality Assurance) process - We like any and all professional software houses use QA testing to test our products.  We take people with different knowledge levels sit them down in front of a computer with our products and competitors products and we test to see who has the better product.  Well, no one except for the author of this review had any issues with our installer.  Some of our QA testers had an issue with Linux Mint when installing additional drivers.  It happens, no one product is perfect.  He says "Well only 3 people"  He is missing the point.  ONE person who has issues is too many.  But I will concede one point, I do disagree with the QA team from time to time and that's OK.  I do apologize they don't like his distribution of choice.  There are plenty of people who DONT like Linux Mint


Once again the PC/OpenSystems LLC website.  We remove the Xubuntu documentation because A) while Xubuntu is trademarked we can't use the name or the logos.  So the Ubuntu documentation is actually removed from the system.  Now we could go through there and change stuff, change the logos and change the text but B) we prefer help to be online because it gives users the ability to contact us real time and actually saves install space while allowing us to update "Help" as necessary.

Robert Rijkhoff, again is trying to make it sound like as we are pushing Linspire and Freespire as something it is NOT.  We arent when asked by him why its derived from Xubuntu our head developer Simon Lincoln made this statement " Good observation.  We do try to stay as close to Xubuntu, Debian and Ubuntu as possible.  That was strategic and planned.  There is a lot of work that goes into the core kernel system.  Im at a loss coming in on the backend of this so I dont know what he gave you.  We do a lot of custom work, as I do a lot of that work, on drivers for SGI and HPE systems.  I work with some HP developers and some of our clients who need drivers either for the graphics subsystem or the kernel itself that specific clients need hence our custom spin generation.  Some customers are on the receiving end of this and some are not.  These drivers are included in the extra-drivers package.  With Freespire in particular and with Linspire we do try to stay as close to the base because we saw what happened with Linspire Inc.  we saw what happened with Xandros and we saw what happened with Parsix.  Shit happens.  Companies go bankrupt.  They get bought out and developers get burned out.  So we made a decision to stay to the base because in the case that something happens our customers are not left struggling or out in the cold and having to rush decisions they can either fire up the Ubuntu or Debian repo's and continue to get updates and they are set and can make a decision later.  Its called contingency planning. "  so were we honest and open with him? Yes.  Now we do have our own commercial repository which is not included in the press ISO that was provided.  Robert had unfettered access to ask the head guy what he wanted.   Instead, he talked shit to the guy and ran off when he realized someone who could give him the MOST answers was presented.

So while yes we can go ahead and tear apart his "review" piece by piece and point by point.  There really is no need.  Opinions are opinions.  For those of the commentators who say they won't "buy" Linux that's fine, Freespire is available for download free of charge and you can form your own opinion.  We make improvements every day and usually have incremental ISO's every week.  Opinions are fine and usually, I don't bother rebutting reviews or people but with this one that had so many untruths aka lies, misrepresentations, and fabrications and why?  Because someone doesn't like your distribution of choice.  I will go ahead and keep selling Linux, services around Linux and hardware to run Linux as I have done for the last 12 years.
Posted by Roberto J. Dohnert at 7:35 PM